Yesterday was the launch of the latest TIN100 results. The TIN100 is the top 100 of NZ’s high tech sectors. It includes a couple of larger companies such as F&P Appliances and Datacom alongside a wider number of software and IT services companies.

New Zealand has made some good progress since 2011 and we are getting towards a more sustainable future. Back in 2011 the late Sir Paul Callaghan pointed to smarter ways to transform the economy. As an exercise in truth telling that “Mapping Out Future” presentation is hard to beat. So much cultural mythology debunked in a short time and new goalposts flagged. I’d like to say NZ listened to that presentation but most people missed it.

I would argue that F & P Appliances is clearly part of the manufacturing sector and F&P Healthcare which is much more profitable and creates higher value jobs if part of the high tech sector.

This is despite a complete lack of understanding among most politicians at the significance and importance of creating high value jobs.

Incidentally the “high tech sector” doesn’t appear on the graph at the top of this page from 4 years ago. And manufacturing seems to have dropped out of the public imagination.

“All told, TIN100 companies had a record revenue of nearly $9 billion. $6.5 billion of that was export receipts, putting high-tech third behind dairy (around $16 billion) and tourism ($10.3 billion) in the export-earning stakes.“

Note this is just the top 100 of high tech companies so the overall export revenues will be larger as the smaller companies are invisible below the top 100. A readers question from later in the article

Whats the revenue for number 100? i.e whats the smallest company to make the top 100 list?

by Chris Keall – NBR Technology Editor | Head of Digital 15 hours ago in reply to JAX
$14.05 million

I’m sure there are at least a good few companies with revenue totals in the $5-14m group. In fact this other list also included in the article shows 10 such companies all below $12m in revenue. 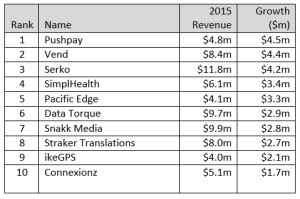 This list of 10 companies are all niche players but they are missing a company like 90Seconds TV which is a creative sector company that is thoroughly enabled by technology.

90Seconds TV are heading for $10m in revenues and they leverage off NZ’s creative IP and and readiness to leverage technology to move fast and be bold. Just a few days ago NZ came number 3 in the world on a creativity ranking. I think we should celebrate that. Mike says no. Mike Hutcheson: Why we shouldn’t celebrate our top 3 world creativity ranking which seems to be an odd response.

Not so long ago we had a great report on the creative sector Creative Industries add $3.5 billion to NZ’s GDP & WeCreate.org.nz formed to Champion the Creative Sector A good number of the creative sectors’growth comes from the games industry which is probably also counted somewhere in the high tech sector numbers. Latest facts and figures for creative sector are over here.

In fact this clip came out a week ago and I missed it as I suspect most people did.

The idea is good but having an address by a pretend politician promoting yet another study is hardly inspiring. We don’t need another study – we just need to get on with it and back the growth of high value jobs and high value outputs.

My personal view is that a combination of sectors will transform New Zealand. It won’t just be high tech. It will be the creative sector plus smart manufacturing and high tech. I wonder why some enterprising investors haven’t doubled the size of F&P Healthcare.

When I wrote about them in 2011 their revenue was around $500m. It looks like will reach $1b in the next three years according to this report UPDATE: F&P Healthcare on target to reach $1b operating revenue in next 3 years

“operating revenue is forecast to be about $800 million and net profit between $135 million and $140 million.”

That is an absolutely brilliant story and we need more of those. In other news today I spotted some results from a single company Ebos who have a revenue of $6.1b. EBIT of $170m

I looked up those numbers to see if there was an export component and sure enough 4.4b was generated in Australia.

“Healthcare, which accounts for more than 90 per cent of group revenue, lifted sales by 5.1 per cent to $5.69b and earnings before interest, tax, depreciation and amortisation gained 11 per cent to $170m.

It is very interesting to me that a single NZ company Ebos can generate $6.1b of revenue by itself – of which 90% comes from the healthcare sector ( same as F&P Healthcare) and somehow it doesn’t get included in the high tech TIN100. The other point of interest is that Ebos generates almost no profit compared to its top line revenue and that must be a cause for concern.

Finally I was thinking about the NZ Dairy sector and its over contribution to NZ’s GDP. I wondered if the total value of real land use resources is being taken into account. I looked over at Go Dairy to see how much land is being used for farming. The answer is 1.7m hectares I don’t have an easy way to do that math but I reckon dairy under counts the true cost of environmental damage and the true cost of its land use. Maybe the RB knows? $35b of debt sounds like a low estimate. Targeting India rather than China seems like the smart thing to do there but NZ/ India trade is “off the radar” at just over $1b last time I saw a number.

Our top export is milk powder. That seems quite stupid in 2015 and maybe some good will come out of the terrible commodity prices if NZ refocuses on the high tech and creative sectors to build higher value jobs. The TIN100 and the WeCreate look to be very welcome ways of reframing and inspiring sustainable growth for New Zealand.

What we need are more high value jobs that have higher margins. Adding creativity to the high tech mix is the best way to do that.

Theme by dialogCRM
Back to Top